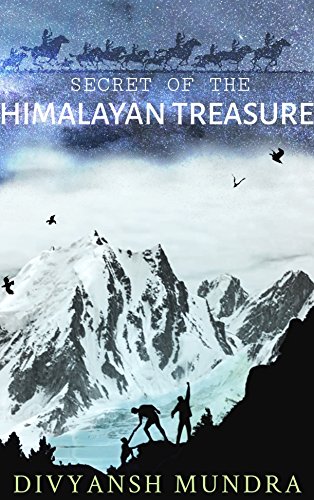 A debut novel by Mr. Divyansh Mundra, and undoubtedly,” amazing work” (which I rarely say). The extend up to which he had thought about the novel’s concept is commendable. For me it was nowhere short of excitements throughout. This is the genre that really excites me – suspense and thriller, hence, the book’s name itself tells the tale.

To be honest, I never thought that this book could be so interesting; it kept me immersed in it till the end. So, the plot is that there is the greatest treasure from King Ashoka’s time hidden somewhere in the Himalayas. When the richest man of India confesses that he is a part of it, chasm ensues.  There his daughter Aanya Vashishtha takes help of, Aarav Kohrrathi an exceptional but an egoistic treasure hunter and his friend Rehann. They all three together takes up the perilous quest to find out the world’s greatest treasure and also to solve the mystery of “The Ring of Seven”, the people employed to save the treasure and as the story progresses they take help from Aanya’s fathers’ associates. Shayna Maheshwari, a billionaire banker who is somewhere herself connected to the mystery. It may sound like quite a simple plot, but actually it’s not. The twist and turns becomes super surprising and thus making it a mind-boggling tale.

Their mission starts from the mansion of the richest man of India in Delhi to 24*7 busy streets of Mumbai, passing through peaceful beaches of Sri Lanka and finally reaching to its final abode from treacherous and curvy roads of Himalayas. They are all ready to unveil the set of secret books, that would be revealing a map which will lead them to their destination.

Talking about this book altogether, the language is extremely simple. One thing which I would like to say is that, Mr. Mundra could have used the language and speech in a better way. If you are a beginner, then absolutely go for this book. The storyline is brilliant, and the uniqueness of this intense story brought my senses to have the privilege of converting this novel into a super hit movie (where we get attracted to Hollywood for such kind of flicks). One thing which can’t be missed is, one can enjoy the great combination of love and loss, logic and emotion, religion and history, action and adventure and much more drama.

It seems like the author himself is quite crazy about history, culture and stuff. The way he has described every minute details related to history whether then it’s Indian or foreign. I guess, he would have topped in history subject in his school. Anyways jokes apart, I mean I was literally amazed by reading those absorbing details.

Divyansh Mundra has created a mystery in the end of the book which still is creating a stir in my mind but I won’t be revealing it here. For that, one has to read this book and find out the mystery themselves and also to find the greatest treasure in the history of mankind, which is hidden somewhere in the deep valleys of Himalayas.

Do let me know about your experience with this book in the comment section below!

View all posts by Kritika Gupta